The popularity of cordless battery powered tools shows no signs of receding at any time soon – both professional users and homeowners are coming round to the benefits of battery, with less noise, lower vibrations and no emissions at the top of the list!

And if you’ve taken the plunge and invested in a cordless garden tools there are plenty of ways that you can make the most of it. We’ve put together an expert guide to understanding and looking after your battery so that it can deliver the performance you expect. Read on for our top ten battery hints and tips:

Tools that are kept clean work with less friction, which means that less power is needed to run the tool and your battery will run for longer. Make sure that all parts of your machine (such as the saw chain or brushcutter cutting tools) are free from dirt and well lubricated.

Trying to use a wet battery in your cordless power tool is a bad idea, but if it does get wet or dirty, simply switch off the machine, remove the battery, wipe it down with a cloth, then put the battery somewhere under cover and let it dry. If the openings in the battery or the charger is dirty, clean them gently with a soft brush.

Make sure that the battery’s contact points don’t come into contact with anything metal either as this can damage it. 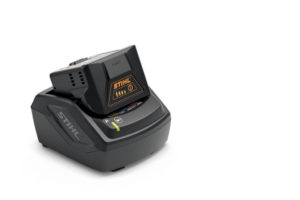 The optimum temperature for a battery during charging is between 0°C and 40°C. Batteries may not charge if they are colder or hotter than this. Both the Stihl AL 300 or AL 500 chargers have an integrated cooling function which actively cool the batteries whilst charging.

Most people know that LEDs on Stihl batteries can be used to show how much charge you have left in the battery. But do you know, they can also indicate faults? If the LEDs are red, instead of green, any of the following could be causing a problem: 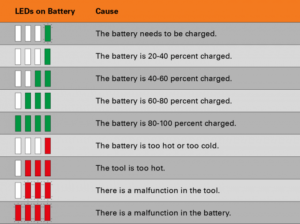 Charging begins automatically when you put your battery into your charger. All STIHL chargers have an LED display and again, this can be used to show up faults with the charger:

Charging your battery often but for short periods of time, to continuously top up the battery is absolutely fine and will have no effect on the battery’s performance.  The battery can also be removed from the charger at any time without any problems, so you can easily charge your battery whilst you stop for a cuppa!

Deep discharge causes damage to batteries and reduces its long-term capacity so you get less charging cycles. STIHL’s intelligent battery system monitors the voltage in the individual Lithium-Ion battery cells so that it is impossible to exhaust or over charge the battery and damage it in this way.

We have two quick chargers (the AL 300 and AL 500) for those of you who don’t have the time to wait. Some people think that charging a battery quickly will reduce the overall lifespan of the battery but this isn’t the case with STIHL power tool batteries. Both of these chargers actively protect the battery during charging, thanks to the in-built cooling function, so that batteries can be charged hundreds of times over without a noticeable loss of capacity.

We don’t recommend that you store the battery in your power tools. Take it out and store it separately in a clean, dry place out of direct sunlight and ideally in some packaging, such as cardboard, to protect it. It can be stored at a temperature between -10°C and 50°C. If you aren’t going to be using it again for a while, we suggest leaving it with a charge level of 40–60% (or two green LEDs). Please also make sure it is kept out of reach of children.

We always recommend a specific battery for all of our cordless power tools, and it might not be the one with the biggest capacity. That is because we take into account weight and balance as well – for example, when using a hedge trimmer, a lighter battery will make the tool easier to use. With the batteries in the AK System of cordless tools, the AK 20 will run for twice as long as the AK 10, but it weighs 0.4kg more than the AK 10. 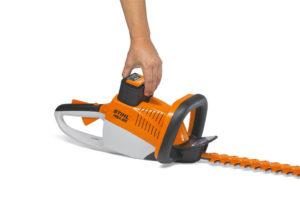 Think about how you will use your power tool, battery and charger. Will you have time to charge the battery so that you have a long enough run time for the job you need to do? Should you choose a bigger capacity battery or a quick charger? Or maybe even buy a back-up battery? Either way, we hope this guide to STIHL batteries will help you get the most out of your battery-powered tools, but let us know about any other battery questions you might have in the comments.

Finally, don’t forget to read the instructions before using any power tool. You can download owners’ manuals and safety brochures for STIHL products here.